Sibanye is committed to reporting in compliance with public and internal regulatory codes and policies which provide all stakeholders with reliable and accurate information regarding the status of the Group’s assets. Furthermore, Sibanye aims to report a level of detail which satisfies disclosure requirements relating to materiality, transparency and competency in reporting. 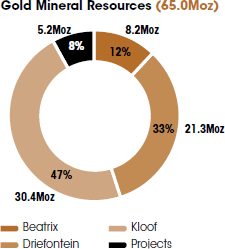 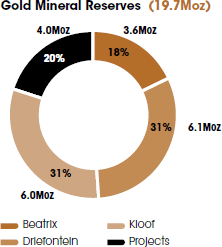 Total gold Mineral Reserves increased by 46% or 6.2Moz (net of 1.5Moz production depletion). This increase is primarily due to lower pay limits resulting from operating cost reductions in 2013, as well as improved mining quality factors. Lower pay limits allowed the inclusion of 0.9Moz of additional Mineral Reserves from secondary reefs. A comprehensive review of all previously unmined areas across the operations (white areas) resulted in the inclusion of an additional 2.9Moz in the Mineral Reserves. Studies are ongoing and further additions from secondary reefs and white areas are likely in the future. A pre-feasibility study was also conducted on the safe extraction potential of the Driefontein 1 Shaft Pillar, which resulted in a further addition of a further 0.5Moz of gold to Driefontein’s Mineral Reserves.

The total Mineral Reserves also include the addition of 4.0Moz of gold contained in Tailings Storage Facilities (TSF’s) at the Kloof and Driefontein Operations that will be mined as part of the WRTRP. A pre-feasibility study on the WRTRP (assessing the potential for extraction of gold and uranium from Sibanye’s West Wits and the adjacent Cooke Operations TSF’s), was successfully concluded in 2013 and is currently the subject of a more detailed feasibility study.

During 2013, Sibanye received the annual award for the best reporting of Mineral Resources according to the South African Code for the Reporting of Exploration Results, Mineral Resources and Mineral Reserves (the SAMREC Code, 2009 revision) from the Investment Analysts Society of Southern Africa (IASSA) for its December 2012 declaration.